A Sample of the Scroll of Rememberance 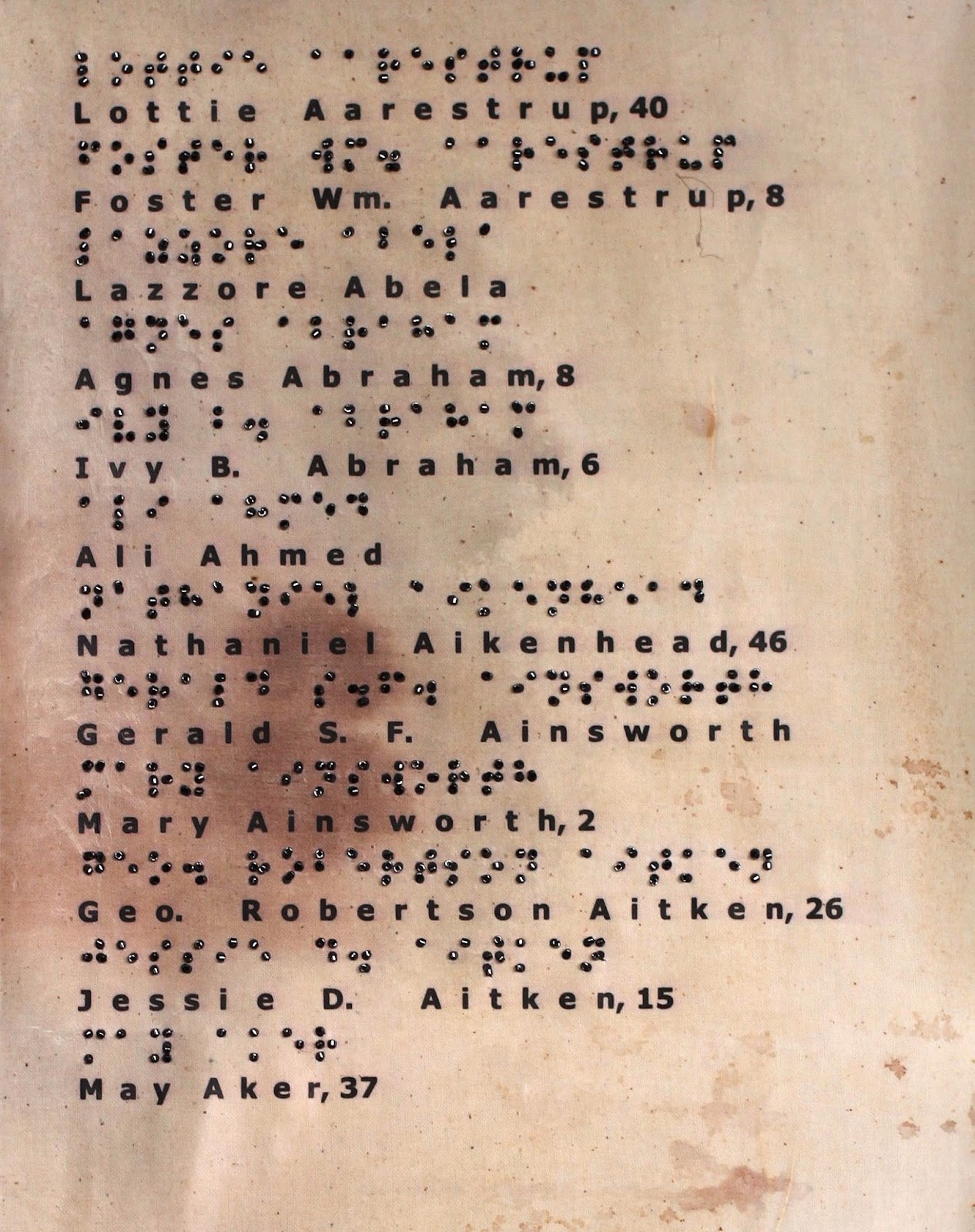 Here's a sample of what Laurie has been working on. She dyes the fabric, adds the transfer sheet, and sends the finished product out to volunteers to be beaded. If you'd like to bead a page or two, please visit our website.

Thanks for your support!

The beauty of fabric | The Chronicle Herald

Ann O'Connell of the South Shore Breaker, a division of the Halifax Chronicle Herald, writes about Laurie's Halifax Explosion Memorial Quilt in this online article.
The beauty of fabric | The Chronicle Herald
Enjoy the article and thanks for viewing.
Posted by Unknown at 12:13 No comments:

Laurie was featured on the SAQA Blog, talking about the Halifax Explosion project. Check the link out and follow it to a short video on Laurie's project.

To mark the Centenary of the Halifax Explosion,
award winning Nova Scotia artist Laurie Swim
has undertaken the creation of a monumental art project, titled

To be completed by 2017, the work will include a Scroll of Remembrance, on which the names of the dead, in English and in Braille, will be inscribed. The Braille references the hundreds blinded by the blast, the largest ever before Hiroshima. The Braille dots will consist of beads, sewn by volunteers throughout Nova Scotia.

A series of textile works, created by Laurie, will complete the work.
Posted by Unknown at 10:08 No comments:

About the Halifax Explosion

The Halifax Explosion of 1917 was a significant, and tragic, moment in Canadian History.

A catastrophic event, resulting from the collision of a French munitions ship and a Belgian Relief vessel, the blast brought the nearby ships and the neighborhoods in the immediate vicinity of the Halifax harbour to rubble, took the lives of more than 1900 people, and left some 600 people blind or suffering serious eye injuries from air born and shattered glass. Families were torn apart, many children were left orphaned, and Halifax as a port and city was dramatically altered.

Laurie Swim’s Halifax Explosion Commemorative Project will be an honoring of the lives lost, the lives instantly and dramatically changed, and the heroic efforts made to assist, to restore hope, and to acknowledge a legacy of survival that continues to this day. It will also be an acknowledgement of the great role played by CNIB, established in 1918, in large part to assist victims of the blast.

Laurie Swim’s Commemorative Project will bring the experience of the Halifax Explosion to a new generation of Canadians. Stories continue to exist, passed down the generations, of lives touched by the explosion, of survival, of kindnesses, and ultimately, of hope.